Letting Go of Voting Rights May Be a Good Investment Strategy

When looking at dual-class firms, dividends are more informative of performance than earnings

It seems unfair that in some companies certain shareholders have voting rights that other shareholders are denied. But could this arrangement actually be good for the non-voting investors? How can one decide? According to research by Kellogg School of Management Professor Linda Vincent, one way is to look at the dividends the company has been paying. In dual-class equity firms, dividends are a better indicator than corporate earnings of what the stock is really worth.

In dual-class equity firms, the insiders — often founding families — have concentrated ownership by virtue of controlling the superior class voting stock. The two-tiered stock structure is designed to let the insiders go to the public equity market to raise funds without giving up corporate control. Hence, cash flow rights are separated from voting rights. This could lead to a situation in which the insiders steer the company in directions that are good for the insiders, but not as good for the other stock owners.

Still, some of these stocks might be a good investment. Vincent points out that Google is a dual-class stock, and it has increased in value more than 600 percent in the three years it has been publicly traded. “Few talk about the fact that it’s a dual-class stock,” she notes. “They may mention it in passing, but it’s the performance that’s notable.”

Vincent, along with colleagues Jennifer Francis and Katherine Schipper of Duke University, examined the role that certain accounting information plays in analysis of stock value. Over the period 1990–1999, they examined the relationships of earnings and dividends with stock valuation in firms with two classes of stock having approximately equal cash flow rights, but with one class having greater voting rights. For example, a firm’s Class A shares may have one vote per share and its Class B shares ten votes per share but both classes receive the same dividend. The authors compared a sample of 205 U.S. dual-class firms with a sample of 5,764 single-class firms matched for industry and year.

According to Vincent, this study results showed that “even in the United States, with the strongest shareholder protections in the world, the credibility or perceived quality of accounting information is lower for dual-class firms than for single-class firms.” A similar result has been observed in studies of East Asian firms, where it has been attributed to important weaknesses in financial reporting and governance.

As shown in Figure 1, Vincent and her colleagues determined that a significantly higher percentage of dual-class firms than single class firms (59% versus 28%) pay dividends. Investors seem to consider the dual-class dividends more credible for valuation purposes than they are for single-class firms, partially compensating for the lower credibility of earnings. 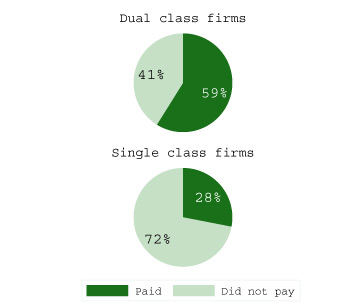 Previous research on single-class firms has suggested that concentrated ownership is associated with an increase in the usefulness of earnings as an indicator of what the stock is really worth. In contrast to these findings involving companies with only one class of stock, Vincent and her colleagues found that earnings are less informative for dual-class firms than for single-class firms. They conclude that reduced management accountability, which both accompanies and stems from the separation of cash flow rights from voting rights in dual-class firms, is responsible for the reduced usefulness of earnings information.

The researchers did find a way for potential investors to gauge the value of dual-class stock. They found that the dividends paid by a dual class stock are at least as informative for dual-class firms as for single-class firms, if not more so. According to Vincent, this is evidence that if a stock is performing well, many investors are not concerned with the specifics of corporate governance.

About the Writer
Beverly A. Caley, JD, is a freelance science writer based in Corvallis, Oregon.
About the Research

Most Popular This Week
Add Insight
to your inbox.