Coupling within the Firm

For today’s multi-business firms—from IBM to General Electric to Kraft—developing strategies and deploying human and financial resources is extremely complex given their highly-diversified operations and globally far-flung offices. How, then, do executives in such corporations optimize these activities? According to William Ocasio, Professor of Management and Organizations at the Kellogg School, and John Joseph, lecturer and doctoral candidate in the same department, the answer lies largely in the degree of governance channel “coupling” in a given firm.

Since well before the rise of massive multinational firms, organizational design scholars have been captivated by how companies go about linking their corporate centers with their autonomous business units. In this context, most experts recognize multi-divisional structures or “M-Form” organizations as the most efficient. M-Form companies have a decentralized system of semi-autonomous operating units and a corporate office that monitors firm-wide operating performance, allocates resources, and formulates business strategies. For such organizations, formal structures and mechanisms called “governance channels” have replaced the market as the primary means of allocating and distributing human and financial resources. But how are strategies best formulated through these channels? Is a top-down process controlled by the corporate center the simplest and most effective approach? How does—and should—information flow between the corporate center and the operating units?

Ocasio and Joseph sought answers to these questions using a framework known as the “attention-based view” of corporate strategies and organizations. In a 1997 paper Ocasio noted that the attention-based view of the firm holds that “an organization distributes and regulates the attention of the organizational actors via communication and decision-making channels.” Examples of these channels include: face-to-face meetings such as strategic planning retreats and board meetings; written communications such as annual reports, budgeting, and operations planning; databases; and Web sites. Those channels can be classified as either (1) governance channels, which serve to plan and allocate resources and to formulate and monitor business strategies, or (2) operating channels, which function to operate and execute projects. According to Ocasio and Joseph, these channels provide key links within and across levels in a multi-business organizational design, and thus uncovering the structure of this broad channel network and the specific contents of governance channels allows us to understand how managers formulate strategies, prioritize initiatives, and allocate resources within large, complex firms.

In order to analyze how a channel network and the flow of information through it impact strategy formulation and resource allocation, Ocasio and Joseph studied the organizational structure of General Electric (GE); they present their findings in a chapter in the 2006 book Organization Design: The Evolving State-of-the-Art. Rather than considering a temporal snapshot of GE, the researchers examined how the network and use of governance channels evolved within the firm from 1950 to 2001, a period encompassing the regimes of four CEOs: Ralph J. Cordiner (1950-1963), Fred J. Borch (1963-1972), Reginald H. Jones (1972-1981), and John F. Welch (1981-2001). The in-depth historical analysis drew materials from primary sources within GE’s corporate archives—including minutes from board of director meetings, executive correspondence, the internal employee newspaper, the R&D center’s internal newspaper—and annual reports and other public documents, along with secondary sources including relevant books and magazine articles.

Ocasio and Joseph focused their research specifically on the role of governance channels in coordinating and allocating financial, human, and physical resources. They identified four channel functions: reporting, staff, control, and agenda. Reporting channels (or line channels) follow the hierarchy of the organization. Staff channels align with corporate policies for the firm’s functional activities. Control channels ensure that business units’ decisions are consistent with organization objectives, and agenda channels are used by senior managers to advance corporate strategic initiatives and monitor their implementation.

The authors found that the tightness of coupling among channels regulates the attention of managers on issues and initiatives, ultimately having significant impact on strategy formulation. In the case of GE, a different degree of channel coupling characterized each of the company’s leadership regimes (see Figure 1). Under Cordiner, the first CEO during the period of study, the firm’s top-down policy and strategy formulation led to loose coupling between agenda management and other governance channels. For example, the corporate agenda for resource allocation was developed through two specific channels: the advisory council and the annual business review. Although the annual business review served both agenda management and control functions, the long-term plans developed by the advisory council were only loosely coupled with the control and reporting channels, leading to weaker overall alignment of corporate and business unit views of resource needs. 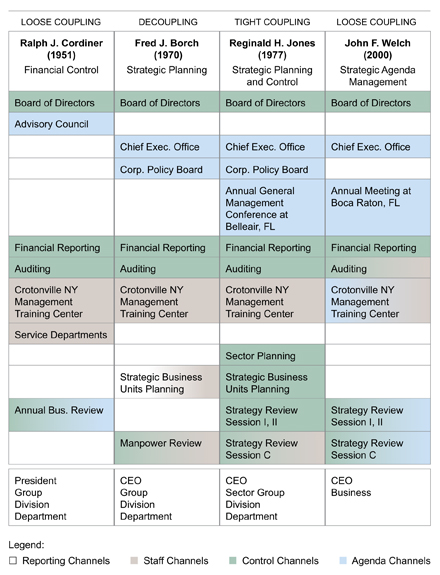 Ocasio and Joseph observed further channel decoupling within GE under CEO Borch, who created the strategic business units (SBUs) to enhance strategic planning. While corporate staff reviewed SBU plans, planning itself was a decentralized activity. As a result, reporting, control (i.e., financial reporting), staff (SBU planning), and agenda management were disparate activities with limited coordination, which resulted in less overall attention to corporate-level initiatives. Borch’s successor Jones mitigated this decoupling by creating a set of strategy reviews that aligned corporate- and business-unit- level issues and initiatives more closely through regular, in-depth meetings between these areas. Instead of having only annual reviews, Jones introduced “cycle” reviews that took place throughout the year, tightly coupling strategic planning, financial planning, and human resource allocation. Jones’s replacement, the iconic Jack Welch, went even further, increasing coupling between strategy formulation and implementation. Specifically, GE transformed the parallel SBU and reporting structure in fifteen strategic businesses by changing the process by which reviews were conducted, from a mostly bottom-up communication to one characterized by a true two-way flow. In this way the channels began to cut across the organization, with loose articulation among them.

Based on their cumulative observations of GE, Ocasio and Joseph concluded that strategy formulation, rather than being the exclusive purview of the corporate office, takes place through the governance channel network that links the line and staff activities of the corporation, as well as connecting the operating units more closely with the corporate center. Further, the degree of channel coupling influences strategy formulation—largely by narrowing the broad reservoir of ideas and initiatives to those that warrant greater managerial attention. In this view, organizational strategy stems from initiatives and perspectives that emerge, in turn, from a network of tightly and loosely coupled decision-making channels. Ocasio and Joseph highlight two related issues: the need to pay close attention to agenda management channels and the need to develop a network of channels that links strategic agendas with specific components and priorities of business units.

The researchers also point out that firms’ decision-makers can generally control the content and degree of coupling of their organization’s governance channels. By altering the content, structure, and sequencing of channels, managers may improve coordination of bottom-up and top-down processes, as well as driving further integration between line and staff. However, Ocasio and Joseph caution that such changes cannot be implemented overnight: the channel aspect of organizational design results from decades of development. As the authors point out, GE managers acknowledge that Welch’s tightly coupled channel system would not have been possible without the organizational structure inherited from his predecessors in the 1970s or even the financial system initiated by Cordiner in the 1950s. Ocasio and Joseph note that it is easier to repurpose channels than create new ones, as illustrated by Welch, who created no new channels but modified extensively the content, structure, and process of GE’s existing ones. This approach is in line with Welch’s and GE’s general tack of innovation; even when the firm has not invented a particular practice, it is well-equipped to improve and popularize it (e.g., the adoption of Motorola’s Six Sigma under Welch).

As a follow-up to the work discussed here, Ocasio and Joseph are refining the methodology by which to measure the degree of channel coupling. To do this they are systematically analyzing GE’s decision-making process, especially in regard to governance channels, for further insights that will surely apply to multi-business firms across industries.

Lecturer in the Department of Management & Organizations until 2008

About the Writer
Viviana A. Bompadre has a PhD in Sociology and conducts research in the nonprofit sector. She lives in Seattle.
About the Research

Suggested For You
Most Popular
Policy
Which Form of Government Is Best?

Democracies may not outlast dictatorships, but they adapt better.

Finance & Accounting
What Happens to Innovation During an Economic Crisis?

The Great Depression hastened the end of the independent inventor—but not all was lost.

Most Popular Podcasts
Careers
Podcast: Our Most Popular Advice on Improving Relationships with Colleagues

Coworkers can make us crazy. Here’s how to handle tough situations.

Social Impact
Podcast: How You and Your Company Can Lend Expertise to a Nonprofit in Need

Plus: Four questions to consider before becoming a social-impact entrepreneur.

Finding and nurturing high performers isn’t easy, but it pays off.

Marketing
Podcast: How Music Can Change Our Mood

A Broadway songwriter and a marketing professor discuss the connection between our favorite tunes and how they make us feel.

More in Organizations
What Makes a Corporate Board Member Most Influential?
Four Reasons Why Hiring Veterans Makes Good Business Sense
4 Tips to Gain Influence in Your Organization
Add Insight
to your inbox.